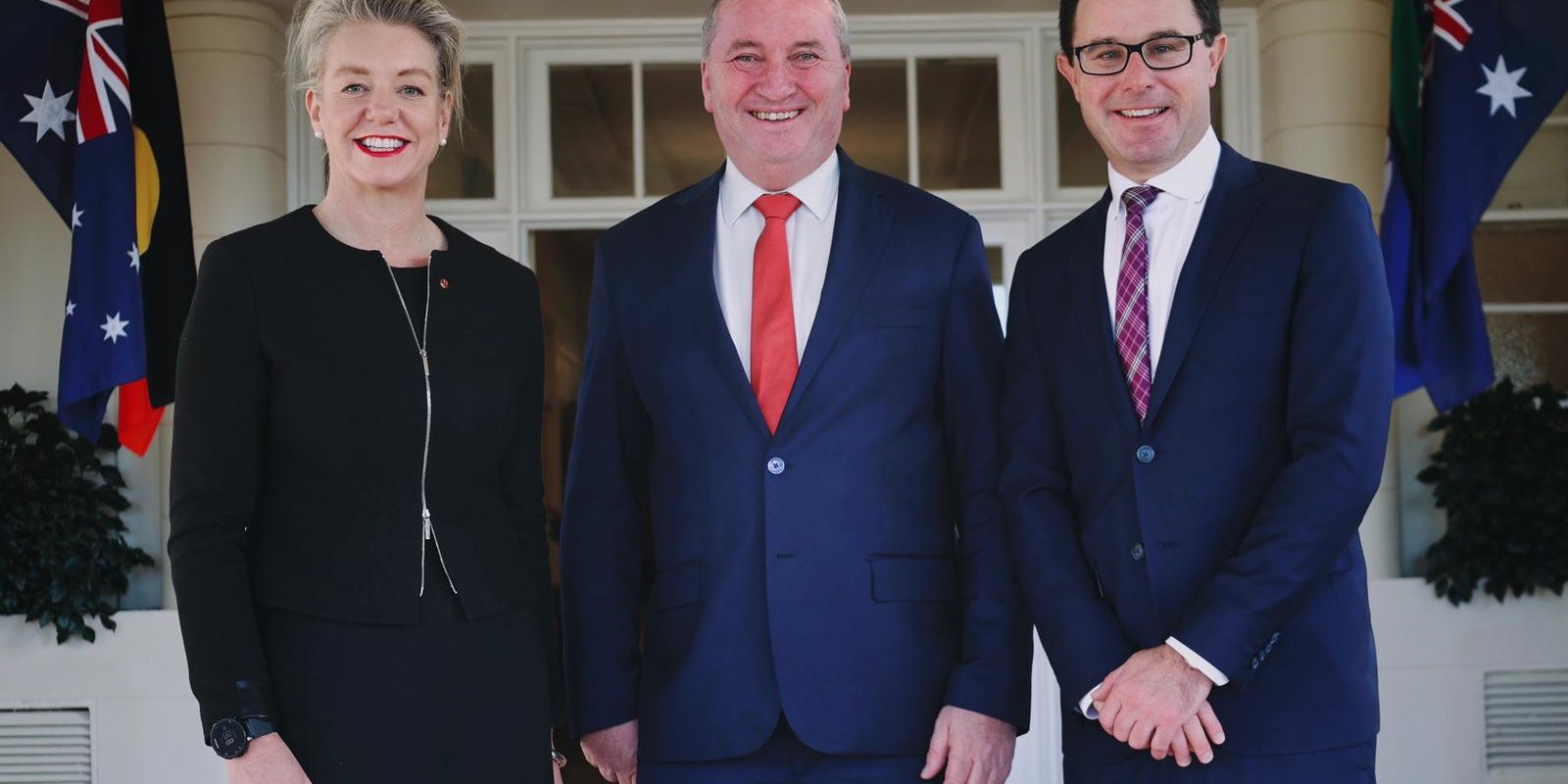 BARNABY JOYCE: Thank you very much. Thank you, one and all, and to the Australian people for their patience and forbearance for what has been an incredibly important process for regional Australia. We are making sure that as we go forward, that the people of regional Australia are in a better position than when the terms and the process were initially delivered to us. We are in support of a process going forward that would go towards a 2050 emissions target. Obviously, that’s dependent upon what we see in the Cabinet submission reflecting the conversations and the agreements between myself and the Prime Minister. We make sure that we do everything in this place to understand the circumstances, political circumstances, and opportunities before us and the realities that are also before us. To understand exactly the cards we have and exactly the cards we don’t have. In that environment, we always make sure that no matter what we do, we give ourselves the best opportunity that the people who feel vulnerable in this process going forward, know that they’ve got a champion who’s going to stand up for them. Standing up for them is not standing outside. Standing up for them is making sure that you’re in the room where the decisions are being made. Heroics that have no outcome, heroics that leave nothing but a rhetorical flourish but leave the person who is hurting in the same position as what they were is not an outcome that the Nationals party room supported. We understand fully, fully, so many supporters who have concerns, so many supporters who have conveyed those concerns to our office. We also acknowledge the people who had a different position and that I think that position is reflected by the decisions that we’ve taken here. For all those people in regional Australia, we will be going into bat for them as we always do and we look forward to the outcome of the Cabinet submission that is coming forward and making sure that what we have negotiated is in the submission so we have a process of a firm commitment once more on our behalf to regional Australia. I’ll now let David and Bridget also have a few words.

DAVID LITTLEPROUD: Thanks DPM. Today, our party room respectfully got to a position of securing but also growing regional jobs into the future, facing up to our international commitments, but making sure we have the safeguards and protections there to ensure that all people in regional Australia can participate, whether that be protecting their existing job or looking to the new technologies. The Technology Roadmap that Angus Taylor has put together gives us comfort around where that can take us, and particularly around protecting the existing jobs that are there and how that technology can in fact help grow new regional jobs. This has been a very pragmatic discussion and very respectful. Our party room, with great maturity, has got to a position that I think makes sense for regional Australia and we support regional Australia now and into the future.

BRIDGET MCKENZIE: There is no other more totemic issue, I think, for the National Party over the last decade than how to deal with climate change and the realities of how climate policy will impact and play out in the communities we’ve been sent here to represent. It’s not just agriculture, it’s not just mining communities, it is the poorest electorates in the country. And we’ve taken that role very, very seriously in all our interventions over the years, shall we say, and we’ve been able to grow mining and agricultural exports over the last decade while simultaneously lowering our emissions in this country. That’s something we should be proud of. I’m also very proud to be part of a political movement which doesn’t shy away from the tough questions, and that for the last 10 days has stood up for our people in this place. The most marginalised people in this country are very far away, out of sight, out of mind, and they’ve only got one small group of people in this place to stand up for their needs and interests, which we have in the face of an abundance of differing views. The party room has respectfully come to a decision and look forward to Cabinet deliberations about that.

BARNABY JOYCE: This is not going to go all night because we’ve got to make the six o’clock news.

REPORTER: Will there be a legislated safeguard mechanism, Deputy Prime Minister, that will be legislated this side of the election? And secondly, did you manage to get an extra Cabinet spot for the Nationals as part of the negotiation process?

BARNABY JOYCE: Let’s go through both of those. The first thing is, what is in the Cabinet submission is now pending, so I’m not going to go into discussions of what is or what is not in a Cabinet submission. We’ve given a broad outline of this. This is in favour of a Cabinet submission that reflects the negotiated settlement between myself and the Prime Minister, and the details of that negotiated settlement will remain private. The second question, any decision that is made in regards to an extra Cabinet position remains in the remit of the Prime Minister.

REPORTER: [Inaudible] and can you tell us anything about talk about a [inaudible] mechanism?

BARNABY JOYCE: Once more, with great respect, I’m not going to talk about decisions the Prime Minister would make, or I would make. We want to make sure within the Nationals we have a clear line of sight going to any discussions, decisions that involve people of regional Australia, how they’re formulated, how they are brought into place, how they are monitored, and how we can review them. Any decision on that is for the Prime Minister. You had a second question, Michelle?

REPORTER: Did you put up the proposal of an extra Cabinet minister? It seems to go against the whole proportionality formula that you’ve always worked on.

BARNABY JOYCE: Michelle, any decision like that is a decision for the Prime Minister.

REPORTER: What would you tell a voter watching from Central Queensland, who’s thinking they’re going to run off now and vote for Clive Palmer or Pauline Hanson after seeing this?

BARNABY JOYCE: What I can say is, the easy decision would be to say no and join other people in screaming and yelling from the sidelines, having absolutely no influence on where the decision went. The conditions that we have negotiated, are by reason that we have a capacity to do it in the Nationals. Without a shadow of a doubt, the position regional people are in now is vastly better than they were before we started those negotiations.

REPORTER: How can anybody know whether you’ve got anything when you’re not even telling us what the conditions are?

BARNABY JOYCE: Because I don’t have to, mate.

REPORTER: Did the Prime Minister make it clear to you over the weekend that he would be going to Glasgow with net zero by 2050?

BARNABY JOYCE: The Prime Minister had made it very clear that he was going to Glasgow. That was a decision that still remains completely and utterly in his remit, and we were completely aware of that as well.

REPORTER: Mr. Joyce, is this now a locked in position of the Nationals? You’ll support net zero, or could this all fall over in Cabinet?

BARNABY JOYCE: I trust the Prime Minister impeccably on the process going forward. With an agreement between the Prime Minister and the Deputy Prime Minister there is absolute trust. He has put forward conditions and we have negotiated them. Obviously, these are conditions that were never ever there before we started negotiations. Now they are there, I’m absolutely certain they’ll end up in the cab sub.

REPORTER: Is anyone from your party going to leave or step down if they don’t agree with this position, anything like that, or is everyone on board and they’re all behind the same target?

BARNABY JOYCE: Quite obviously, it’s a very vexed issue. People have very, very strong feelings on both sides. Out of respect for those feelings, I’m not going to start commentating on what one person or another person may do. We are the most democratic party in this building without a shadow of a doubt. In fact, I would say the discussions that we’ve had in the last week, you’ve not had those discussions in any other party.

REPORTER: Mr. Joyce, can I just ask what your personal view is? Did you support the majority view in the party room, or did you have a different view about net zero?

BARNABY JOYCE: Out of respect for absolutely everybody in that party room, I’m going to keep any position of any person absolutely private.

REPORTER: What about your own? You are the leader, you’re entitled to express your view.

REPORTER: I know on Thursday night the party room meeting, the MPs didn’t see the document prepared by your four wise people, for the Government. Today in the meeting, was everybody in the party room absolutely clear on what the conditions were?

BARNABY JOYCE: The process we took forward was allowing our committee to have one on one discussions, communication with the people to collate those views. Before we went into any discussions about what people’s positions were, they saw not only the document that was going forward, they saw the response from the Prime Minister coming back, and a summary. That is about as open as you can get. Then we opened the discussion.

REPORTER: Can I clarify one thing? If any member of your front bench doesn’t agree with net zero by 2050, is it tenable for them to remain on the front bench?

BARNABY JOYCE: The position of the party room has now been stated. That is the position. That is the position we always said we would follow. The party would make their position known. Every person in the freest party is allowed to express their views. We don’t believe in those sort of Marxist state views of other parties, where you are never allowed to dissent or never allowed to have a different view. There is no point starting a discussion about people’s views if you’re only going to accept one of them. What is the point of that? Unless you want to be a member of the Australian Greens.

REPORTER: Was there a vote?

BARNABY JOYCE: No, there was no vote.