You are here:
Media ReleasesUncategorized 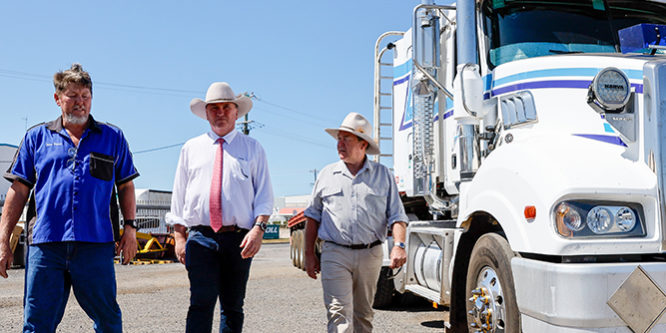 The Morrison-Joyce Government is continuing to deliver better and safer roads across our regions, with new investments totalling $150 million in 33 projects under the Remote Roads Upgrade Pilot Program.

This funding will ensure more unsealed and neglected roads throughout rural and remote parts of Australia get the attention they need, making them safer and delivering motorists and freight to their destination sooner.

Funding will go towards upgrading unsealed roads and safety works including resurfacing and removing dangerous corners.

The Liberals and Nationals understand the importance of reliable roads in the bush and we are committed to delivering much-needed upgrades to as many roads as possible.

Our Government is investing more in regional roads than ever before as part of our record $120 billion 10-year infrastructure investment program. These investments are made possible by the Coalition’s strong economic management.

Deputy Prime Minister and Minister for Infrastructure, Transport and Regional Development Barnaby Joyce said the roads targeted have been neglected for years.

“That’s why we’re delivering much-needed upgrades to some of Australia’s neglected roads. Families living on farms shouldn’t face barriers to getting their kids to school, or visiting the grocery store.

“Improving remote roads will keep motorists safe and freight moving, ensuring regional businesses can continue to get their products to ports quickly and safely.

“This is part of our vision to make our nation as strong as possible as quickly as possible.

“While not surprising, it is a shame the Labor Party will never deliver this funding.

“The Member for Moreton, Graham Perrett, believes upgrading remote roads is irresponsible, which tells regional Australians everything they need to know about Labor’s plans for our regions.”

Our Government recognises the costs to upgrade rural and regional roads is often prohibitive for local governments, which is why we are committed to providing this vital funding for neglected roads.

Only the Liberals and Nationals have a plan to make regional Australia stronger, safer and wealthier.